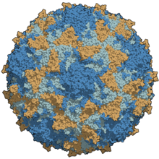 Polioviruses are spherical, non-enveloped RNA viruses that belong to the family Picornaviruses and to the genus Enteroviruses.  These viruses cause poliomyelitis, commonly known as ‘polio’. Poliovirus is highly infectious. The incubation period is usually 7–10 days but can range from 4 – 35 days. The virus is shed by infected people (usually children) through feces, where it can spread quickly, especially in areas with poor hygiene and sanitation systems.

In August 2022, the U.S. Centers for Diseases Prevention & Control (CDC) published a case report confirming poliovirus in an unvaccinated, immunocompetent adult resident of New York, and poliovirus has been detected in waste water samples in two neighboring counties. Prior to this discovery, polio had been eradicated in the U.S. for approximately 40 years. Persons who are not vaccinated against polio are at risk if exposed.

Most people who get infected (up to 90%) experience no or mild symptoms and the disease usually goes unrecognized. Up to 25% of others will have initial flu-like symptoms which can include fever, fatigue, headache, vomiting, stiffness in the neck, and pain in the limbs. These symptoms usually last for 2–10 days and most recovery is complete in almost all cases.  However, in the remaining proportion of cases the virus causes paralysis, usually of the legs, which is most often permanent.  Paralysis can occur as rapidly as within a few hours of infection.  Of those paralyzed, 5-10% die when their breathing muscles become immobilized. A smaller proportion of people with poliovirus infection will develop other, more serious symptoms that affect the brain and spinal cord.

Poliovirus only infects people.  Poliovirus is very contagious. Poliovirus is transmitted through contact with the feces of an infected person or through direct or indirect contact with contaminated individuals or surfaces. The virus enters the body through the mouth and multiplies in the intestine.  It then invades the nervous system. The virus lives in an infected person’s throat and intestines.  It can contaminate food and water in unsanitary conditions.

You can get infected with poliovirus if:

Some strains of the virus may remain infectious for as long as 2 months in sewage depending upon environmental factors (inactivation by sunlight, high temperature, etc.). The virus can live in an infected person’s intestines for many weeks.  People who don’t have symptoms can still pass the virus to others and make them sick.

There are two types of vaccine that can prevent polio:

Polio vaccine protects children by preparing their bodies to fight the poliovirus. Almost all children (more than 99 percent) who get all the recommended doses of the inactivated polio vaccine will be protected from polio.

It is also very important to practice good hand hygiene and wash hands often with soap and water. Note that alcohol-based hand sanitizers may not kill poliovirus.

Poliovirus is a non-enveloped virus, susceptible to the following Diversey disinfectants: